Electric snowmobile for mountains above 4.5 km

Snowmobile for climbing the mountains.

Long-post about an electric snowmobile for climbing mountains. I’m doing a video report from a test drive up the hills.

Let me remind you a little bit about the idea of the project.

A friend went on a trip to Elbrus in 2019. He is an experienced mountaineer, works as a rescuer and deals with speleology. In general, the experience of about 20 years of work in extreme conditions and organization of rescue work. 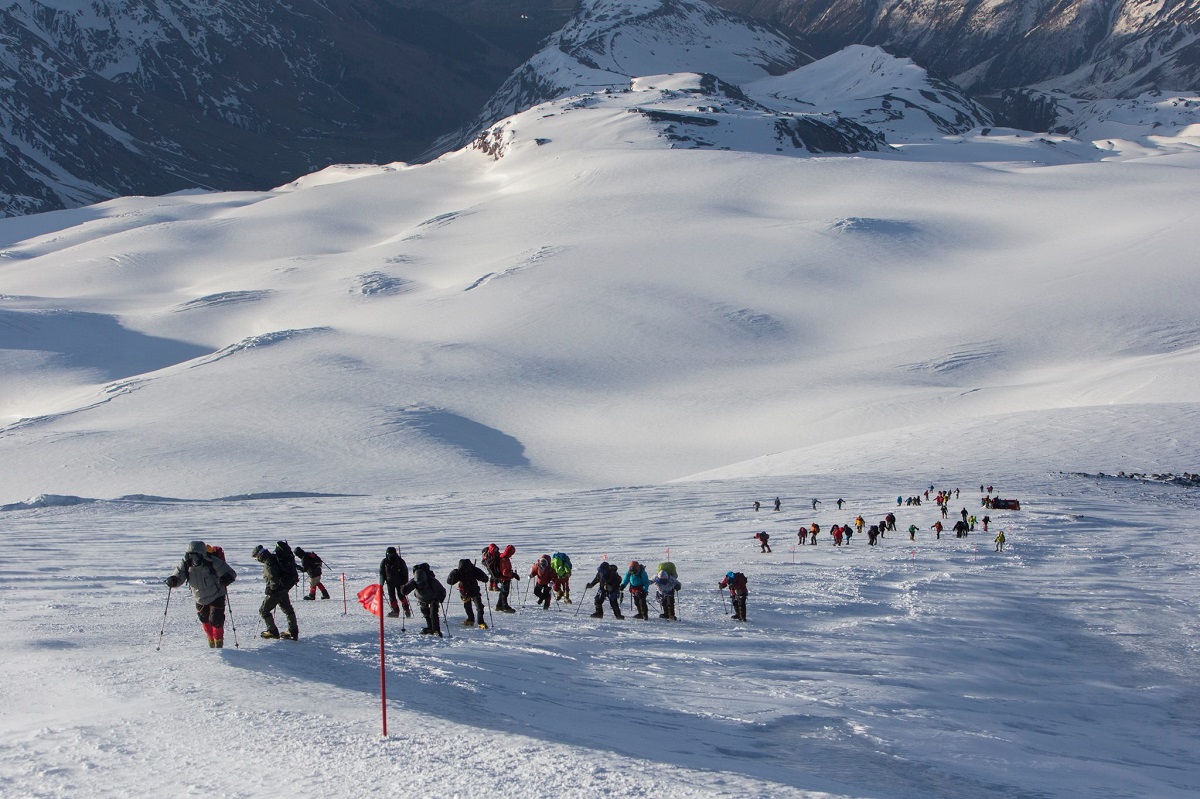 A friend he went to Elbrus for the first time, and wanted to get exactly in winter, so that the conditions were more difficult and the memories remained more interesting. He understood that he needed preparation, but he was going on a trip alone, at least from Samara. In general, he went, but as usual he got acquainted in the plane with the guys who on external signs (clothes and cheerful mood) also went for this purpose and decided to go with them.

Climbing is very dangerous. Without special training it is better not to climb there, because even professional athletes were killed there. And the worst thing is that they are not even taken out of there, as it is extremely laborious. They just lie there forever, if their relatives do not have money for a helicopter. There are so many pictures of them online and it seems to be the most famous. 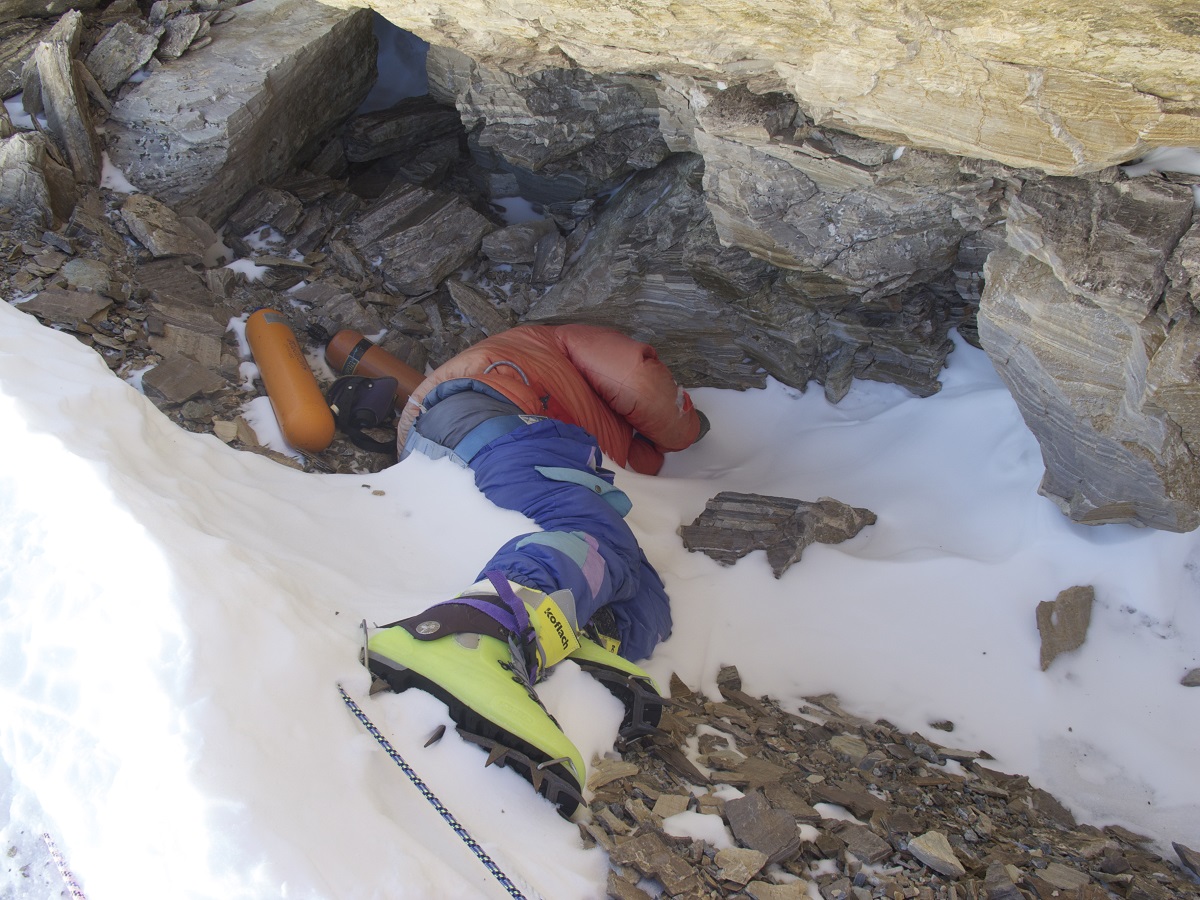 After the hike, of course, I began to ask my friend what is it like there, because I dreamed of going to Elbrus, but it did not work. I think every man dreams to try himself, understand his limits and show what he can do.

So, I was digging into the smallest details, and I was very interested in what it was like. Judging by the stories, the hike turned out to be a tough but tough one. There were some problems that made me think about optimizing the process.

He told me that there were guys who physically could not climb to the end, because such a climb requires a lot of strength, especially in winter conditions. And that neither rat race nor classic snowmobiles can bring people to the top even for a very large sum of money.

The principle of climbing is approximately the following: you take 10 steps, stand breathing. Then 10 more steps and rest again, because each step takes a lot of energy. 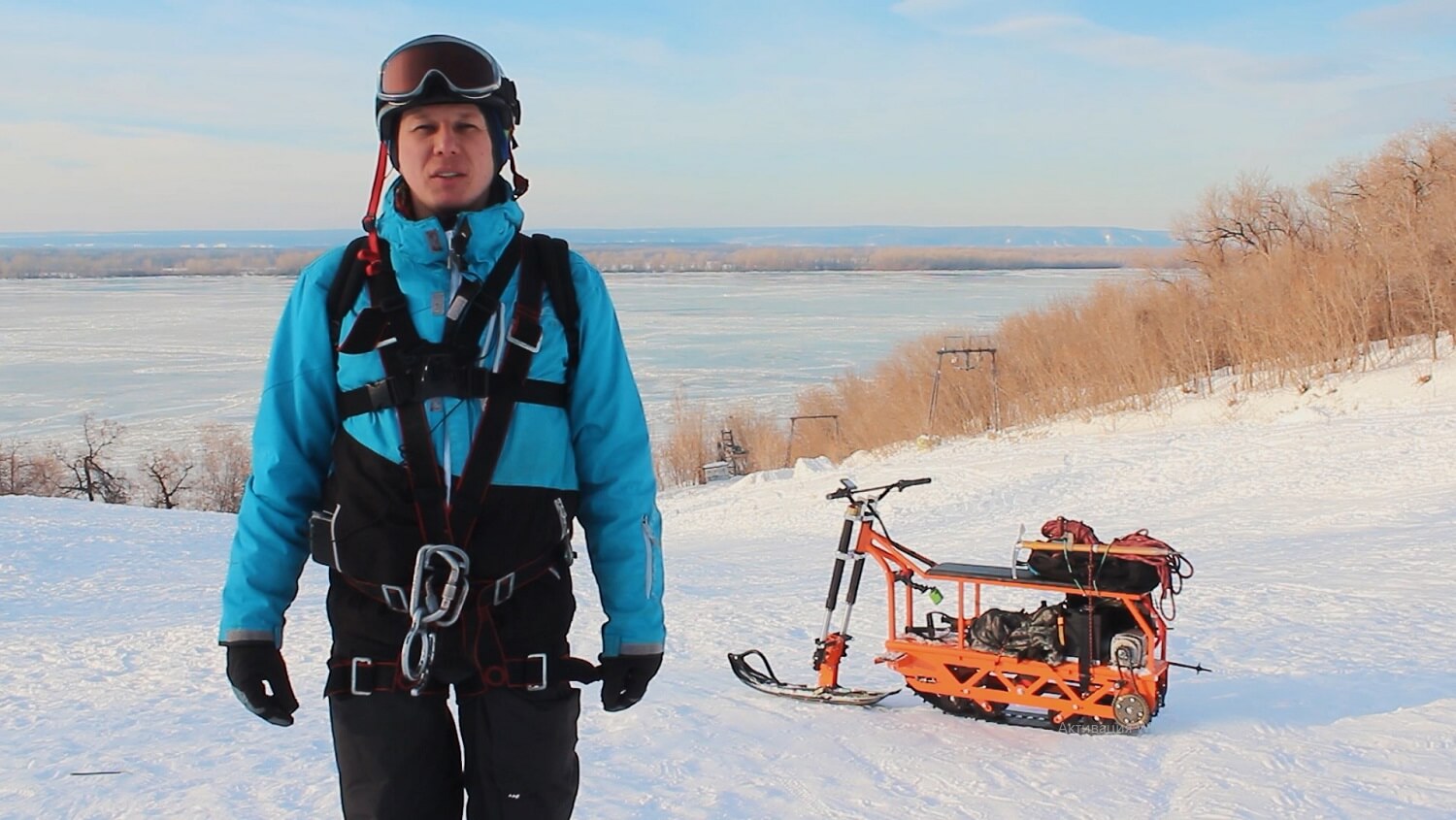 That’s where we came up with the idea – why not use an electric snowbiker for such a climb.

It is worth distracting ourselves and specifying why we should not use a snowmobile or a rat race.

In simple words, at an altitude of about 4500 m above sea level any gasoline engine starts working with severe failures, or even stops working at all. A special altitude sensor and an automatic carburetor corrector are required.

Of course, the comments will appear in the “couch experts”, who will say that you can adjust the nuts by hand, twisting the necessary screwdriver. But think what it’s like to stop every hundred meters of height and twist the settings in the freezing cold where there is not enough oxygen and for the usual location. I think it would be extremely difficult physically. There are car dealers, but they don’t put them on all snowmobiles. 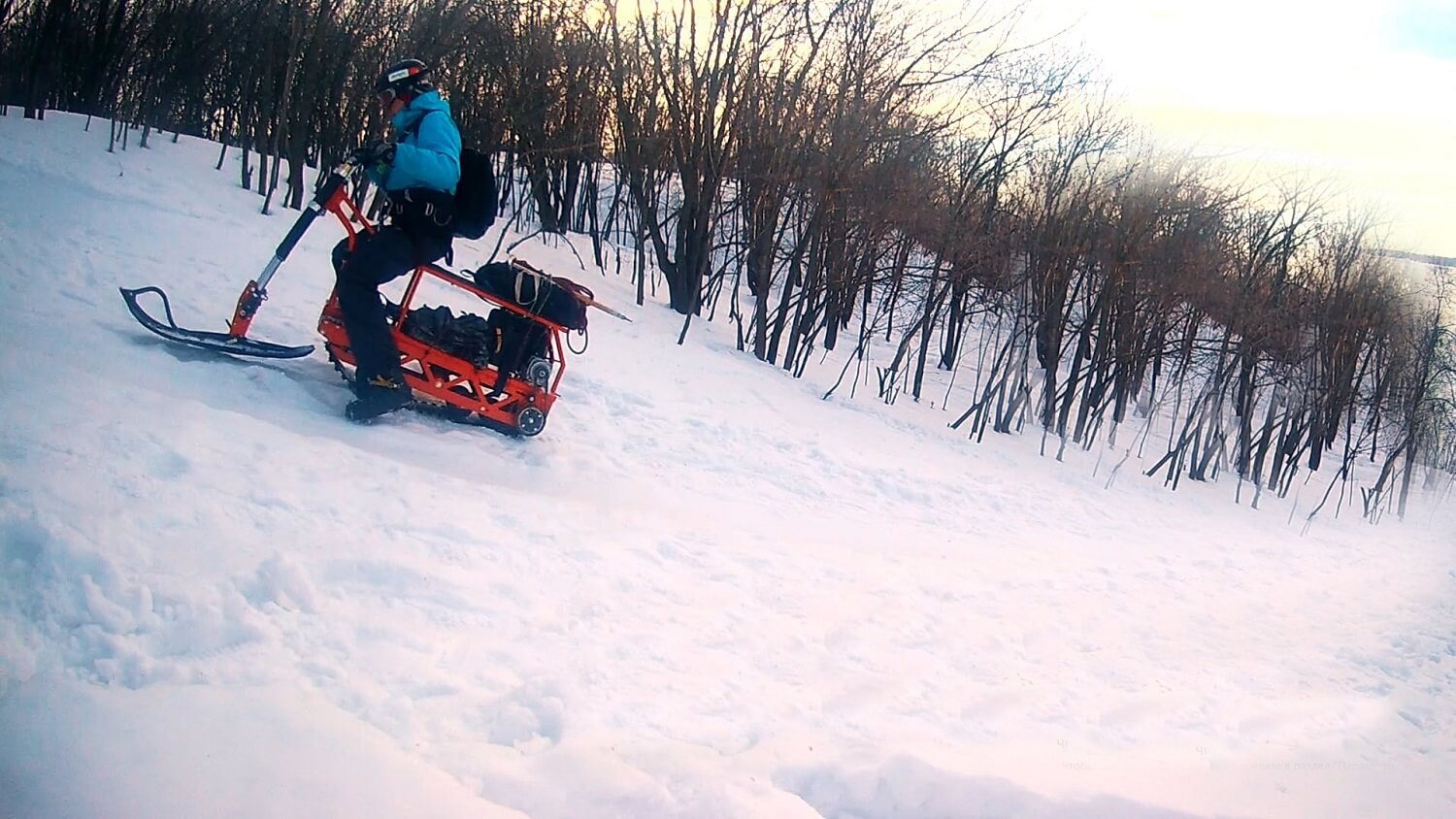 Another problem, not so frequent, but still, there is a flood of candles, with too much tilt. Yes, it happens at 40 degrees and above, because the classic technique is simply not designed for such climbs. In general, it too is solved by special settings, but not in stock versions and under the order.

Yes, near Elbrus there are tours – local cunning offer at the rat race for an N-number of money to rise in the company to 4 km and then on foot. Cost is not cheap, quite problematic and not often, because you need to recruit a group.

Snowmobiles also go up to about the same height, 1-2 people. But the snowmobiles have one more problem – transverse stability. If to go across a slope (on a way with a transverse slope) the snowmobile will aspire to tip over down, having pulled the driver behind. To avoid this, you need to put a lot of effort and carry the weight. There is even a special technique of riding (bundling), but it is designed only for loose snow 50-100 cm. And on a rolled slope it is practically impossible to drive on a snowmobile across.

Then I think the course of my thoughts is clear. In the conversation in a friend, we thought, because low pressure does not affect either the batteries or the engine of an electric snowmobile is the ideal solution for climbing mountains. And the small size and the possibility to hang the equipment, in general, allow landing on the lift up to 4.2 km and even rescue work. 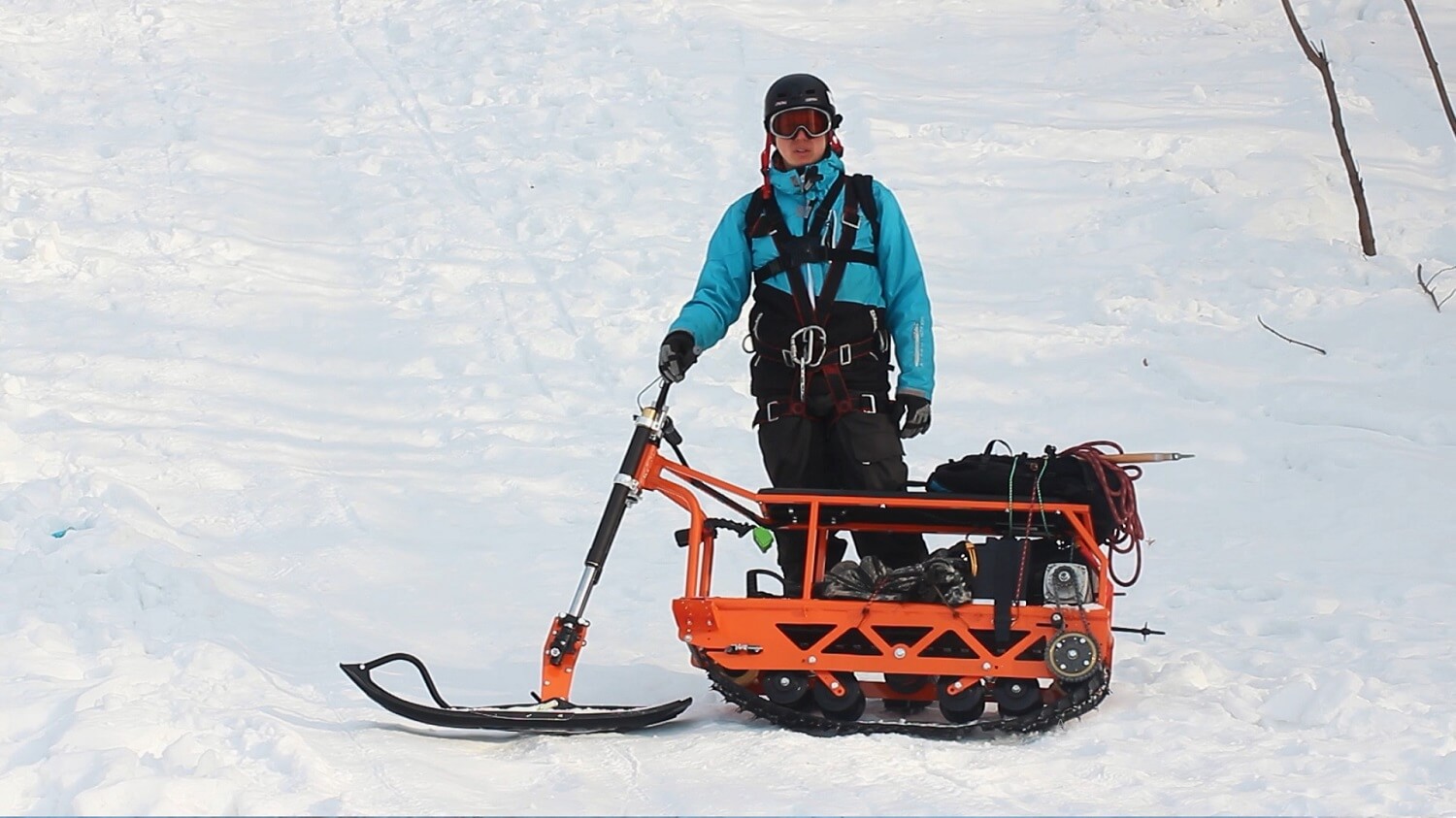 In general, I was very inspired by the idea, and it was useful to study what people use and how it all goes.

I looked through almost all 3d of the Google maps from the mountain. By the way, I advise you very much, you can really understand what and how. In general, it allowed you to assess the complexity of climbing and form an idea.

I looked at the climbing track, where you could estimate the height differences and travel time.

And, of course, Googled what kind of technique has been at such heights. 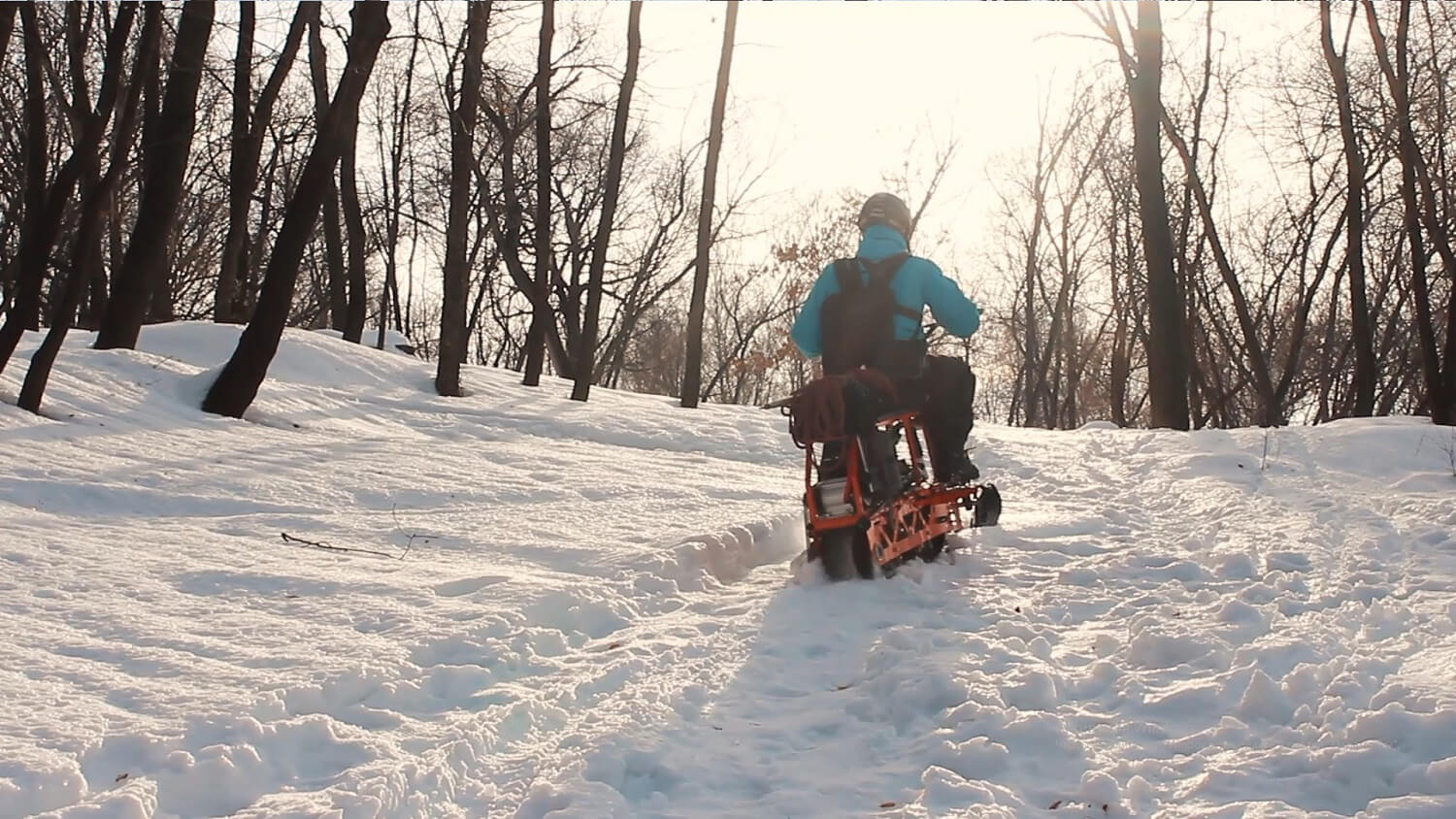 Apparently there was an ATV on the mountain. But they lifted it like this, with a big pile of equipment. There are very few pictures and no video at all. There’s also no photo on the top. I suppose they left it there instead of launching it, so it must have been cheaper and easier. But of course, I could be wrong.

In the past post, there were also “sofa searchers” who put up links that they themselves did not even look. There was a lot of videos supposedly like a snowmobile rising above 4500 m. But with a more detailed study was that either the name of the clickable or the author confused and in general, the comments found out quickly what is the real height.

There was still some motorcycle in the ancient years on the mountain, but except for one picture, I have not found anything.

If you have any confirmation that the equipment was already at an altitude like Elbrus, above 4.5 km, then I will be glad to see confirmation by photos, links or video clips in the comments. 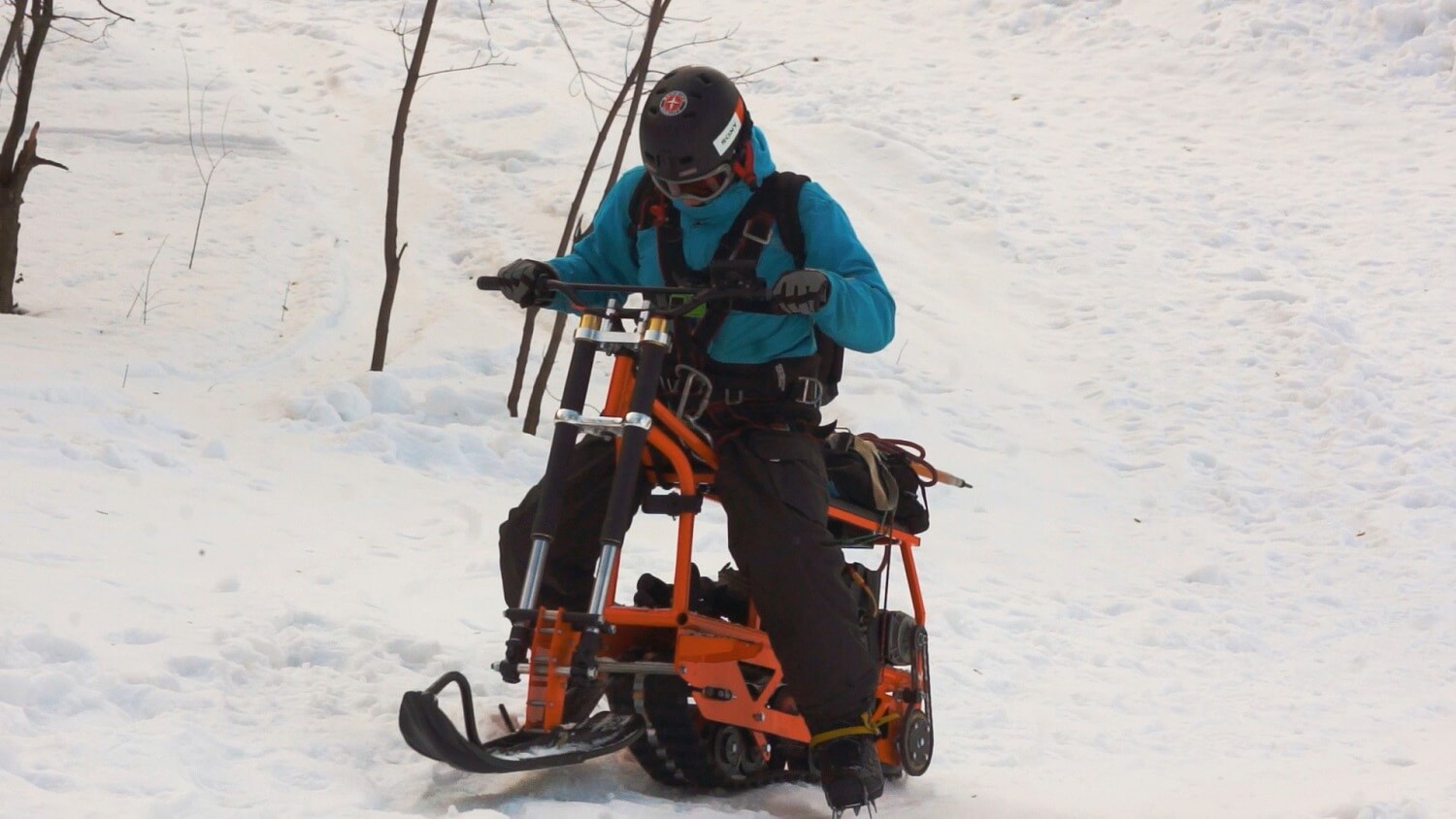 In general, the lack of confirmations warmed up the interest even more, and gave birth to a thought, and why not set a record “first electric snowmobile on Elbrus”. And here we go.

Immediately there was an opportunity to adapt one of the bikes, which I was going to adapt for the first tests in conditions of climbing a mountain. The bike was the easiest to complete, with a steel frame. But it was even enough to go up a mountain with a 35 plus slope. 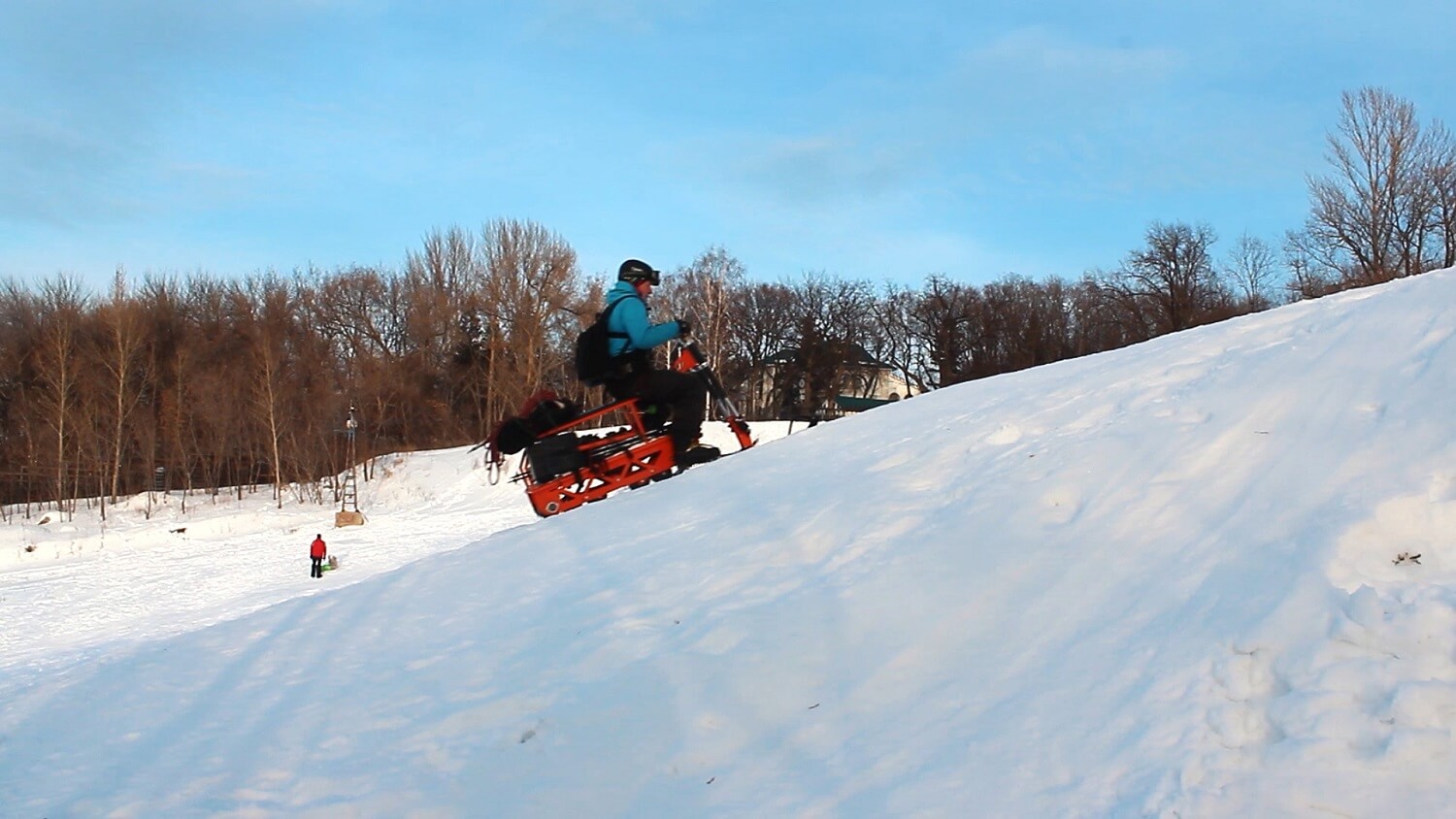 I had to really put a big star downstairs to increase the torque. Because of that, the speed was greatly reduced, but he was very cheerful to pull up the mountain, even with equipment.

The caterpillar on the scooter was only 5 inches wide. And the chassis with spring suspension. 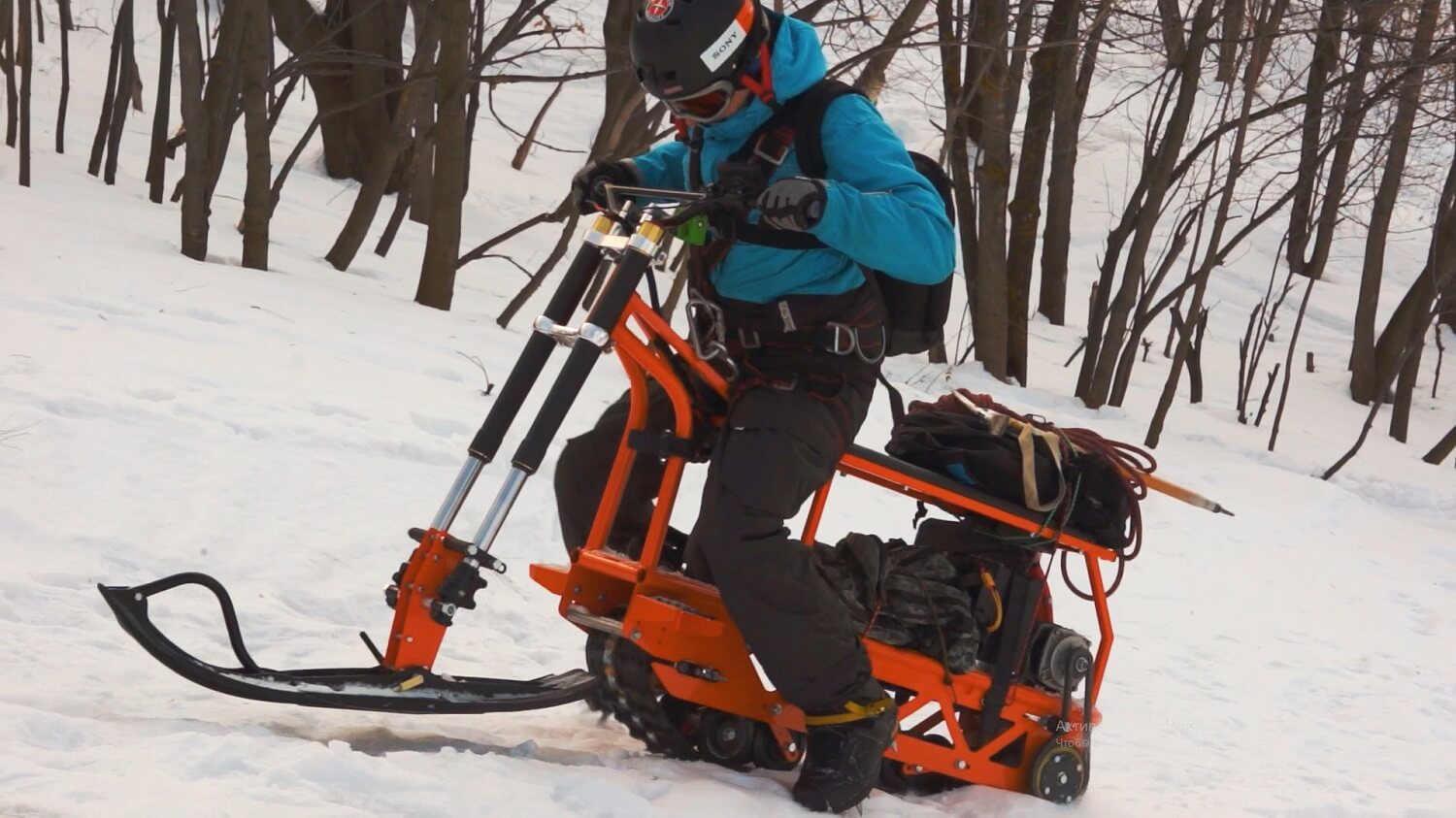 We went for a test on small slides, but we’re looking for the most difficult ascents to evaluate all the limits of this electric snowmobile.

And of course, we didn’t go all the way. For example, in the picture, the climb does not seem big, because of the perspective of the lens, but in reality there and on his feet difficult to climb, not to mention the snowmobile.

In the middle of the ascent is a large piece of ice, which repulsed our creation. I am sure that if the caterpillar had been spiked, the scooter would have risen, and so far these obstacles have not been conquered. 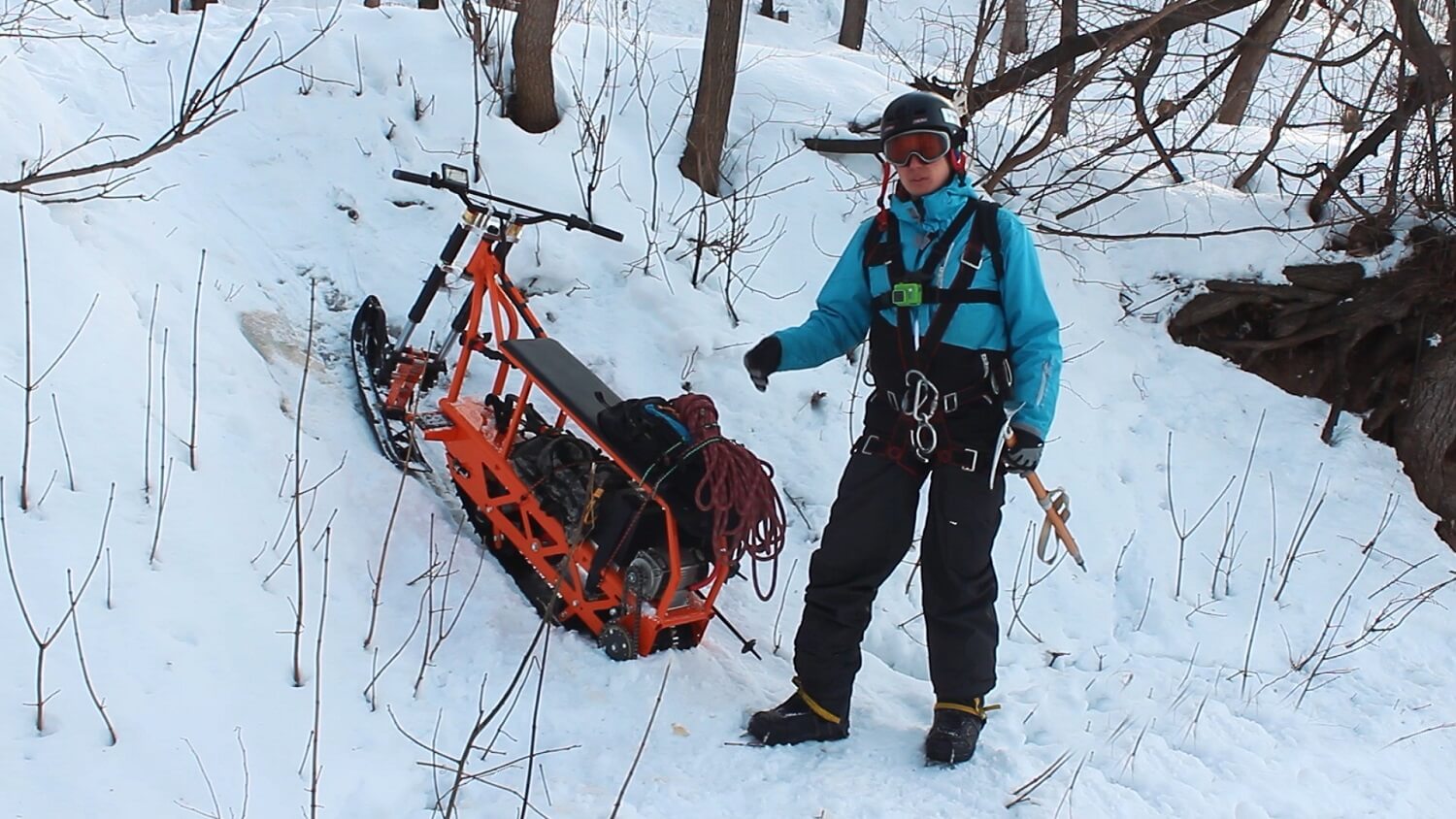 Then there was a longer, ice-free lift on the way. There was a trailed path, a little slippery. And then we had no difficulty climbing. I drove the first time on a slope of about 35 degrees and 50 meters long. Tracked the system and saw that the engine is not even 70% unloaded and that there is still power for more difficult obstacles.

I had to really help myself with my feet, because I did not guess with the position of the footsteps, and there was no time to rearrange, I wanted to conquer new “tops”. And in cats on shoes, it was a bit difficult to keep balance on these footsteps. But I’ll tell you right away that I came up with a more convenient variant of footsteps for such tasks. 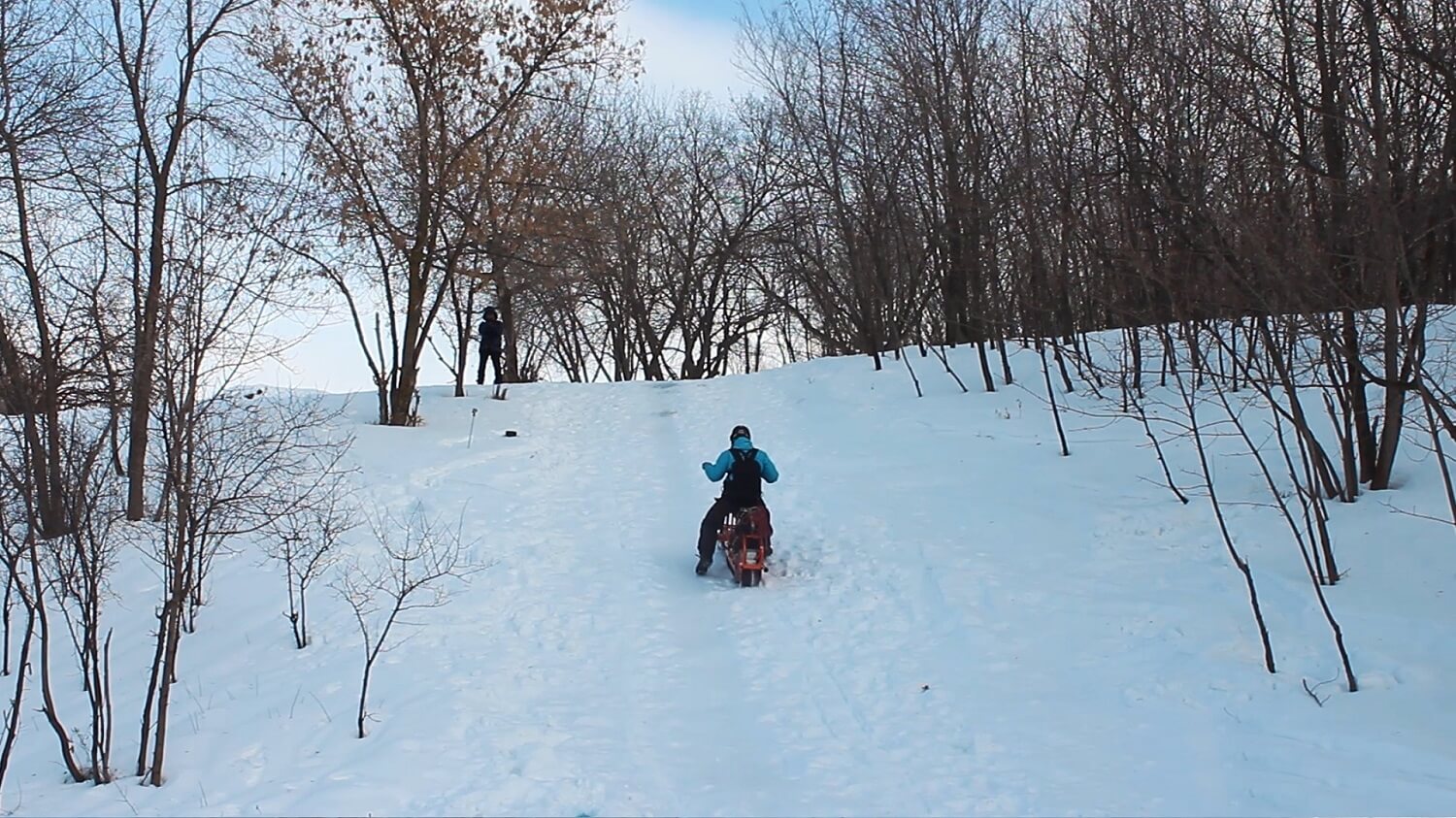 I went for a ride in the forest, studied all the routes and went to a more difficult area.

There was going to be a long ascent with a slope of 20 degrees and length of 200-300 m. I made a mistake in the video when I evaluated it. But on the whole, it seemed to be quite an impressive test for such a small device.

But with a speed of 5 km/h, I had no problem getting upstairs. Neither the controller nor the motor heated up even to half the operating temperature. 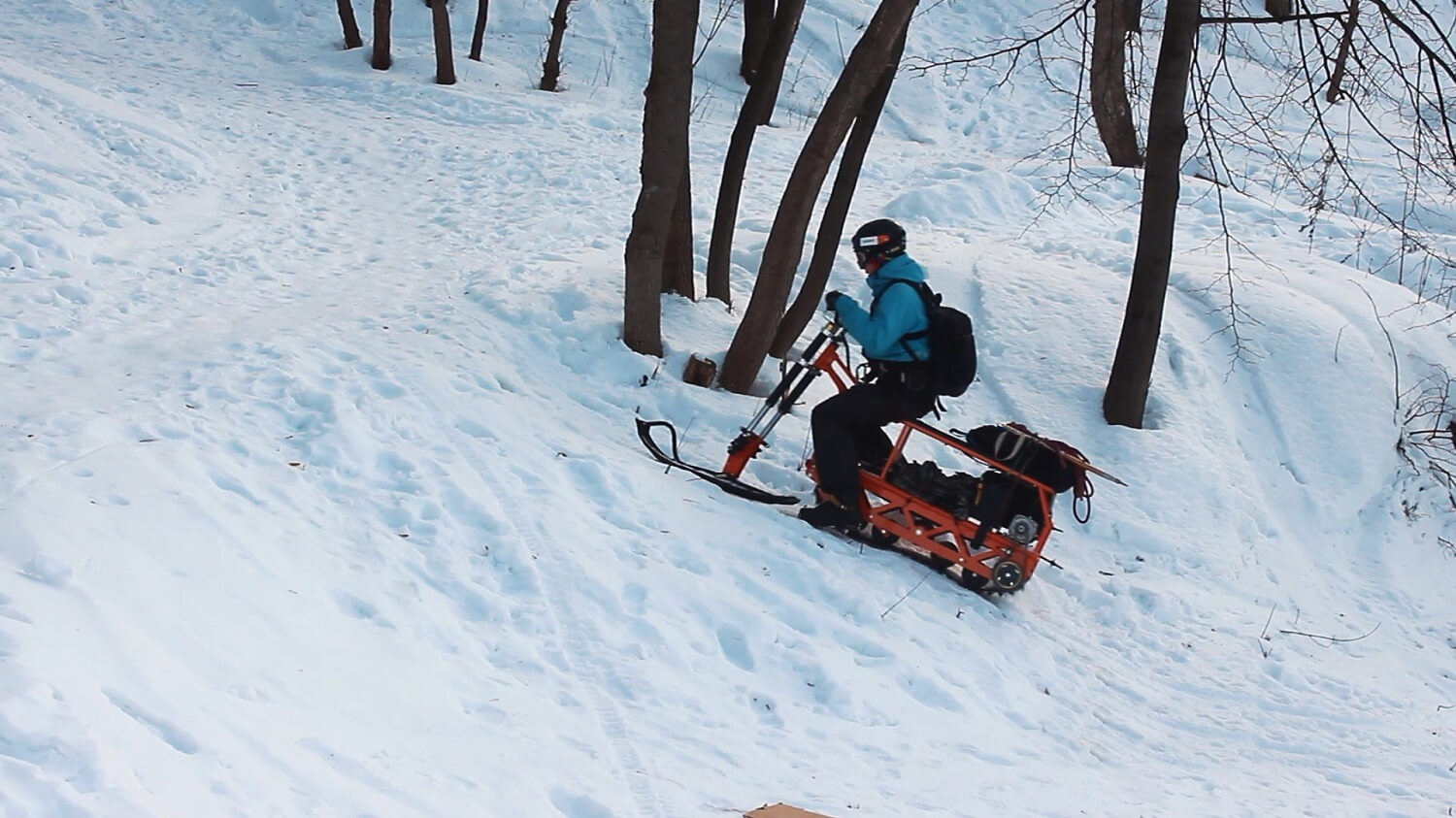 In general, after the test, it became clear that the scooter withstands the mountain climbing, but has its disadvantages. In general, it seemed quite enough for the first test of an electric snowmobile in the conditions of climbing. Moreover, the scooter went to its owner, and I’m still planning more serious tests, on a more powerful device. 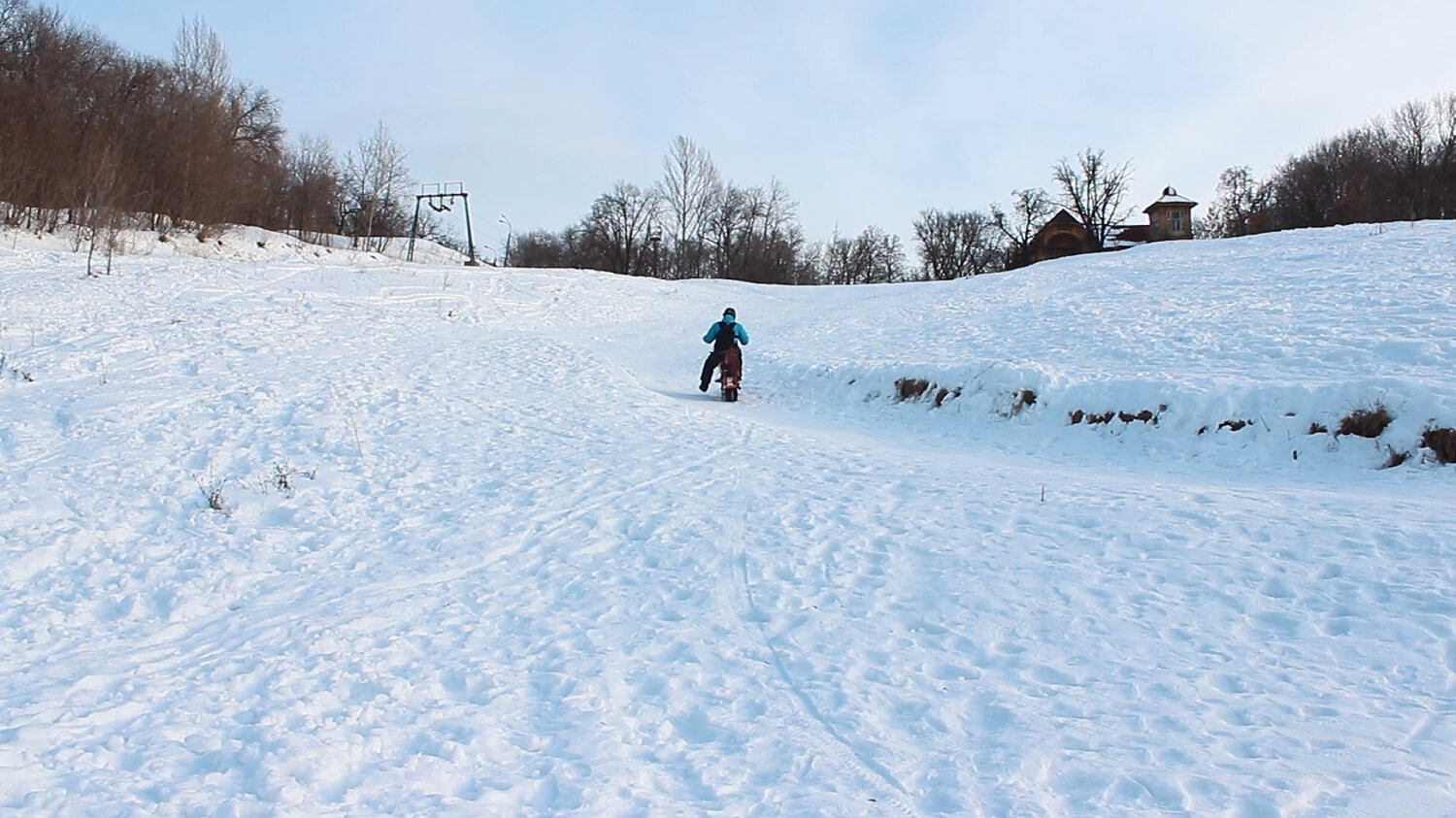 Based on the test results, I realized that the task is quite feasible. With proper training, even such a small snow scooter can easily compete with a classic, and even mountain snowmobile in the conditions of climbing, due to its advantages:

– the low weight will allow one person to handle it without problems. It can be lifted in the right place with equipment and dragged even on the transition stairs through the gorge.

– The small size will allow you to load it on the lift, even when it is open, and to land at the right height.

– ride across the slope without tipping over, as the track is narrow and only one ski.

– Drive along the trails trampled.

– carry equipment and supplies, not on your back.

– to charge your gadgets and equipment from your scooter.

I showed photos and videos with tests to my friend’s mountaineers and they all joked that you can easily offer the service “climb for losers”, but of course did not want to offend anyone. Simple words can be such a scooter or even a group of scooters to help make your dreams come true for people who physically can not visit the top. At the very least, not newcomers, but pros who accompany or rescue workers who come to the aid of those who get lost in the mountains.

Potentially, such a device will save a lot of energy for more useful tasks in the mountains. But it’s not sure, of course, it’s just fantasies to be tested in battle. 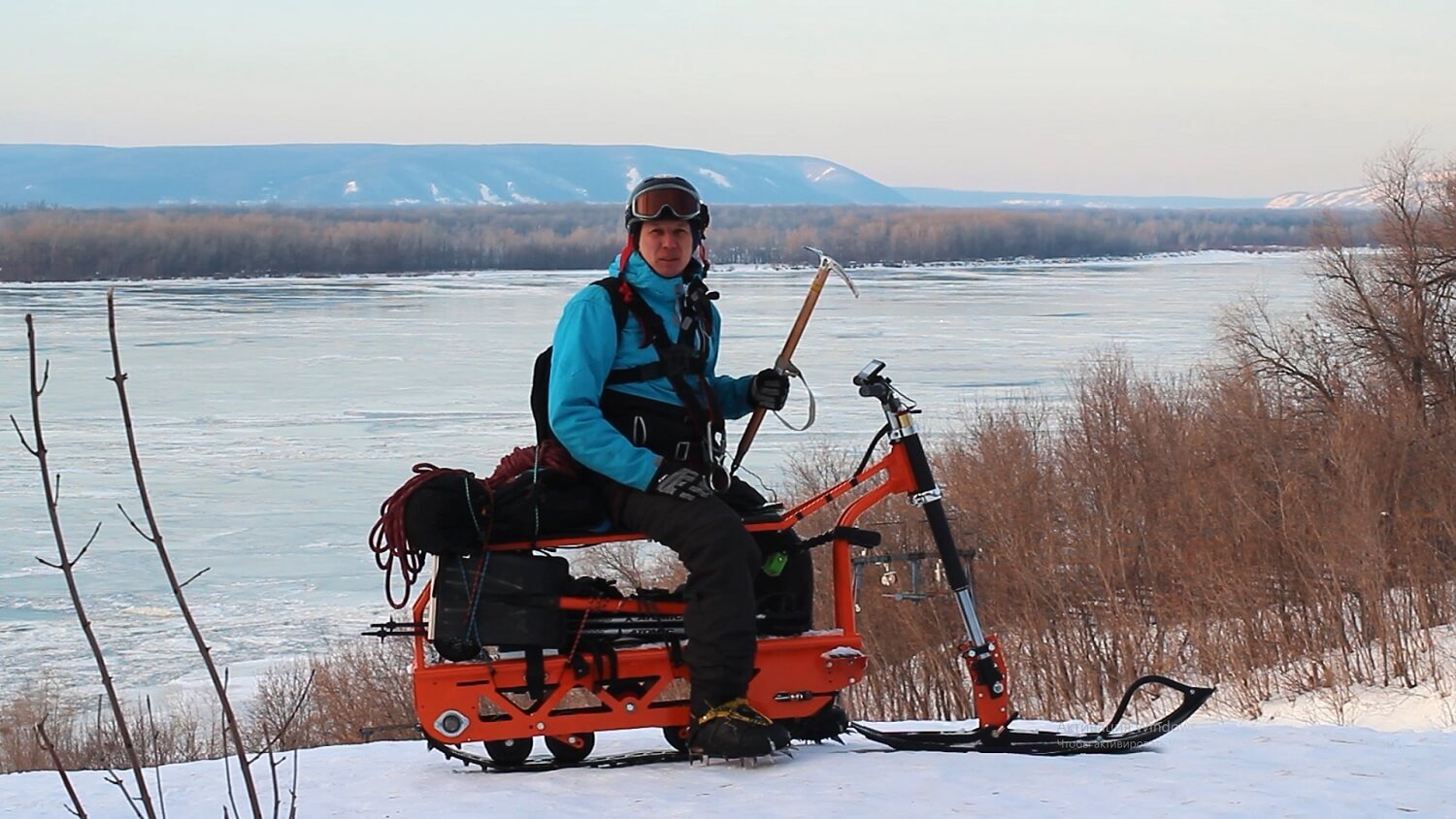 I will keep those interested in the topic on my channel, so if you are interested, sign and spit it out, or argue your point of view. 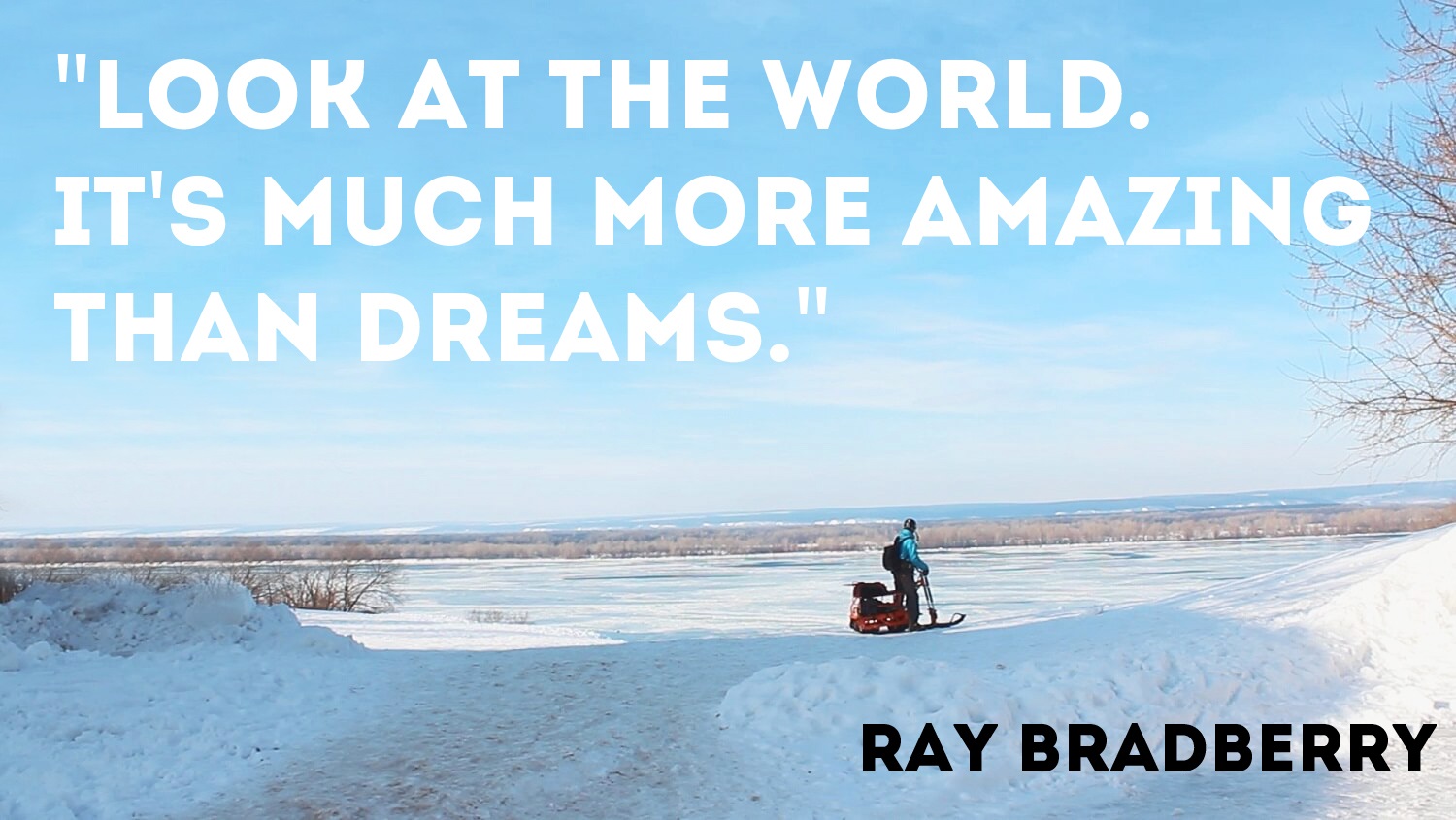